The robots came in all shapes and sizes to crawl, swim and fly at University of Toronto’s Institute for Aerospace Studies (UTIAS) and York University.

The Natural Sciences and Engineering Research Council held its Canadian Field Robotics Network (NCFRN) field trials at U of T and York April 17–23. The event featured talks and presentations, workshops, networking events and opportunities for collaborative fieldwork and demonstrations.

It was the first time all the significant field robotics capabilities in Canada (universities, companies and government organizations) were brought together in one place, he said.

“It showed researchers the common problems we are working on and sets the stage for much greater collaborations over the next five years,” Barfoot said.  “I think the NCFRN marks a critical milestone for the future of robotics in Canada because by working together we will accomplish a lot more than in isolation.”

Several robots were showed off during the trials, ranging in size from tiny flyers to hulking planetary rovers.

First up at York University were the bright yellow Grizzly units, developed with the support of industry partner Clearpath Robotics. Equipped with advanced sensory equipment, these land covering vehicles can be used in surveillance or convey roles where it is costly, impractical or unsafe to send people. Next came Eddy, a dual-hulled sea-faring vehicle designed to explore places that are expensive, repetitive or dangerous to access. This intelligent craft can be programmed to execute repeated search and analysis patterns, never missing a quadrant, never complaining about the weather and can send back data on-the-fly. The final performers at York were two agile three-wheeled robots, equipped with a 360-degree field of vision and intelligent stereoscopic sensing technology. Developed in partnership with CrossWing, they are designed to facilitate virtual visiting, for example, for monitoring geriatric patients. 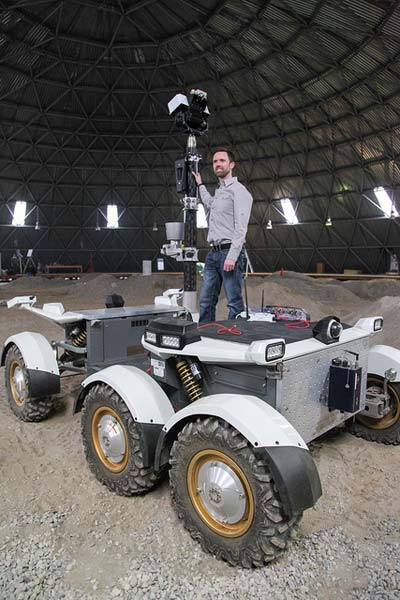 The demonstrations then shifted to the UTIAS MarsDome, a 1,100m2 enclosed testing facility which has been modified to simulate an extraterrestrial surface. First up was the Juno Rover, a Canadian Space Agency (CSA) research robot, which was tasked with finding a hidden target among the hills and valleys of the alien landscape, returning on its own using advanced autonomous navigation abilities developed at UTIAS.

The largest robot of the day was the hulking white Lunar Exploration Light Rover, with its towering array of sensors, built by MDA MacDonald Dettwiler Space and Advance Robotics as part of an effort by CSA to prototype future planetary rovers.

Next on display was the Artemis Jr. rover, built by Ontario Drive and Gear for CSA. The Artemis, with unique autonomous navigation algorithms developed by Barfoot was designed to have reduced reliance on sensors, and therefore to have less risk of technical failure. 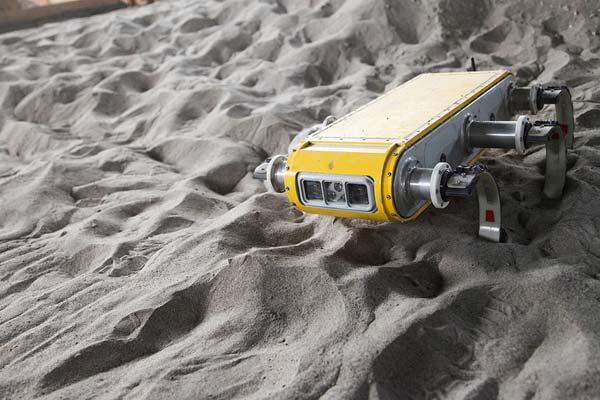 The small and amphibious Aqua robot followed. Built by researchers at McGill and  ork, the Aqua demonstrated its climbing abilities by scaling ramps, hills, and walking over all small obstacles in its path.The final rover of the day was UTIAS’s own Husky A200 – a small yellow rover built by Clearpath Robotics – which ably demonstrated its autonomous navigation technology.

The crawlers were followed by the flyers, including the Pelicon quadcopter, eight-propellor flying machine air surveillance units demonstrated by McGill, and a pair of quadrotor flying robots from Simon Fraser University which showed their human interaction and facial recognition technology.

The day rounded out with a group demonstration ‘free-for-all’ which resulted in the largest number of tele-operated robots ever roaming and flying at once in the MarsDome, Barfoot said.